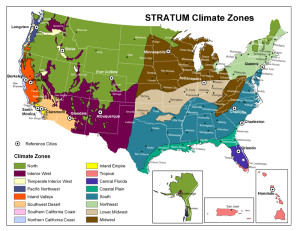 Aside from the aesthetic appeal, homeowners need to consider the performance and durability of the window replacement they choose  for their home based on their climate region. Different climates have different window needs. Talking with a professional contractor in your area can  help you select the right window replacement that’s best that region. As well, we broke down the best and worst window replacement choice by region.

Residents in Northern California, Oregon, and Washington states, generally have a Mediterranean climate; mild, cool and humid and sometimes arid.

Residents in Southern California, Arizona,  Texas and other Southwestern states, generally have a temperate climate: very hot summer and cool and mild winter.

Residents in Maine, Michigan, New York and other Northeastern states, face bitter cold and frequent storm during the winter and hot and humid temperature during the summer.

Residents in Florida, Mississippi, North & South Virginia and other Southeastern states, have a humid subtropical climate. Sunny winters and rainy summers with the occasions of hurricanes are common weather pattern in this region.