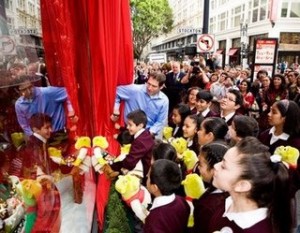 The holidays are often associated with the expression of love, appreciation and charity. One of the best illustrations of these expressions is showcased at Macy’s annual holiday window display at their west coast flagship store in downtown San Francisco. Every year, Macy’s teams up with the San Francisco Society for Prevention of Cruelty to Animals (SF SPCA), a animal shelter and clinic, to help raise donations and find homes for misplaced animals by displaying adorable kittens and puppies in Macy’s store windows in San Francisco.

Macy’s began featuring these adoptable animals on November 16 and since then, have generated over $400,000 in donations and found homes for over 2,300 animals. The San Francisco store window display it still viewable to the public until January 1st and Macy’s and the SF SPCA hope to raise more support and awareness until then.

Although there are many holiday attractions in SF, Macy’s window display is a must-see event as well as a great way to support charitable causes as we like to do here at AAA Window 4 Less. 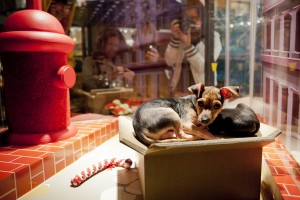